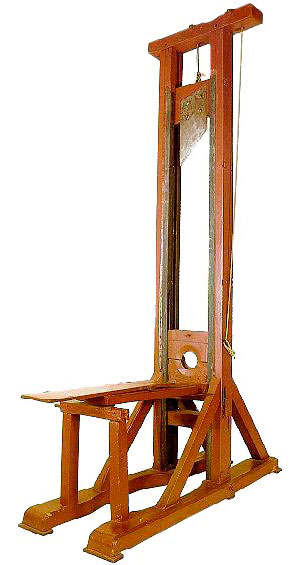 The guillotine in Bruges

In 1796 Bruges (Brügge) purchased a guillotine for 346 pounds. However the guillotine that can be seen in the Gruuthuse museum in Bruges (reopening 25 May 2019) is not the one from 1796, but probably the Antwerp guillotine, that was bought to Bruges on May 13, 1856.

The guillotine is from the start of the 19th century, and is well preserved. Only thing missing is the release mechanism at the side of the upright.

The guillotine is made of red painted wood with iron grooves and fittings. It seems that this guillotine is of the type, that when the execution was over, the headless body was dropped through a hole in the scaffold under the bascule.

The last execution with this guillotine took place at the prison gates on Pandreitje on April 3, 1862. The victim was Pieter Acke. 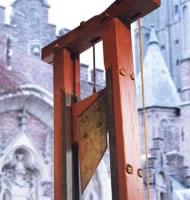 The iron grooves are bolted to the uprights 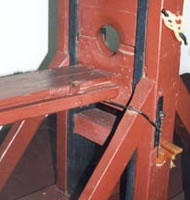 The Bascule can be released and tip down, and let the headless body slide trough a hole in the scaffold. 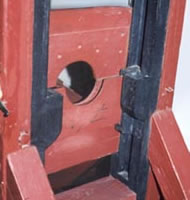 The lower part of the lunette has an extra part made of iron. The blade cuts between the lunette and this extra piece.