The upper crossbar containing the release mechanism.
The grab holds the mouton in place until the the déclic (a handle on the side of the upright) is pushed down. This opens the jaws of the grab, and the mouton is released for its journey down. The metal door, which normally covers the internal mechanics, has been removed on this illustration.

The Mouton & the Blade

The Mouton is the weight that runs on two wheels in each groove. The spike on top fits into the sprunggrab of the crossbar. The blade is fixed to the mouton by means of three bolts. 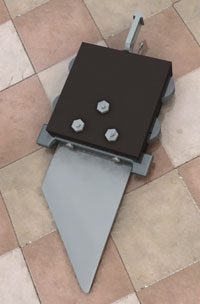 Leon Berger an assistant executioner and carpenter improved and developed the construction of the guillotine in 1870-72.

It was such a perfection of the machine that all French guillotines manufactured after 1872 were based on his design. 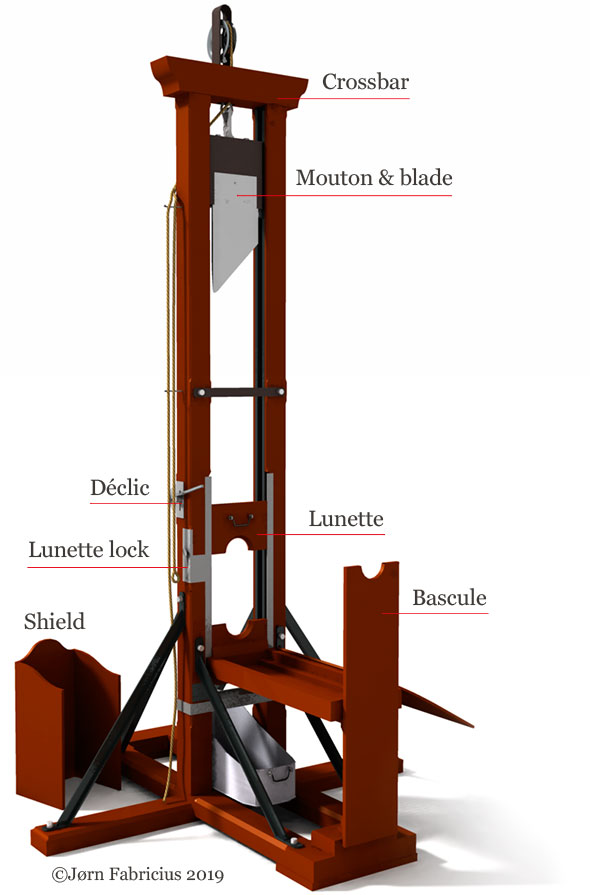 This part of the guillotine is made of two wooden pieces, one fixed and one moveable. The lunette is copper lined at the side towards the blade. It is used to hold the neck of the condemned in position. 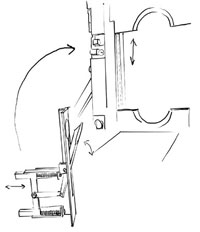 This is the handle that, when pushed, releases the upper part of the lunette, and the handle locks the lunette in the lower posision, when it is released. At an execution this handle is pushed an released a split second before the déclic is pulled down.

At the start of the execution this tilting board stands in vertical position. The condemned is pushed against it, and is tilted into horizontal position, face down with his neck in the lunette between the uprights. On the side of the bascule is a sort of table, also hinged, which is there to make it easy, to push the headless body into a big basket immediately after the execution.

The shield is placed in front of the lunette, to protect the executioner assistant from the blod spatter.