The History of the Guillotine

The history of the guillotine started long before the French Revolution, but when and where exactly, nobody knows.
Guillotine like machines seem to have functioned in Germany, Great Britain and Italy before 1300, but there is no clear evidence to prove this.
The earlier machines replaced the axe, but the guillotine replaced the sword in the way they cut.

According to Holinshed’s Chronicles published in 1577, this guillotine like machine was used at the execution of Murcod Ballagh near to Merton in Ireland 1/4/1307. 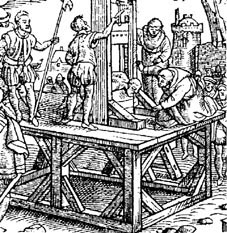 (Picture British Museum)
This woodcut is from a book published in 1577.

The Halifax Gibbet, a precursor to the guillotine was used in Halifax, England, at executions on market-days. May have functioned as early as 1280. The last execution with the Halifax gibbet took place in 1648. 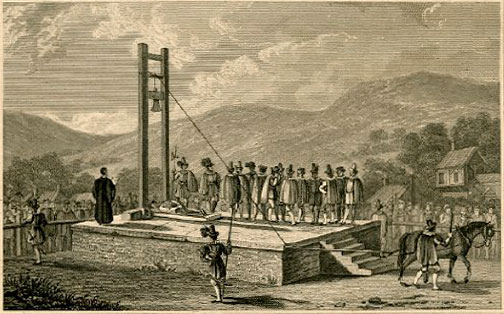 The Maiden was constructed and used in Scotland. It was based on the Halifax Gibbet.

10/10/1789 On the second day of the Assembly debate about the Penal Code, Dr. Guillotin submitted a proposition in six articles which included a recommendation that death, without the accompaniment of torture and by means of decapitation, should become the sole and standard form of capital punishment in France.

2. In all cases where the law imposes the death penalty on an accused person, the punishment shall be the same, whatever the nature of the offence of which he is guilty; the criminal shall be decapitated; this will be done solely by means of a simple mechanism.

3. In view of the personal character of crime, no punishment of a guilty person shall involve and discredit to his family. The honour of those belonging to him shall be in no way soiled, and they shall continue to be no less admissible to any kind of profession, employment and public function.

5. Confiscation of the condemned person's property shall in no case be imposed.

6. The corpse of an executed man shall be handed over to his family on their request. In every case, he shall be allowed normal burial and no reference shall be made on the register to the nature of his death. 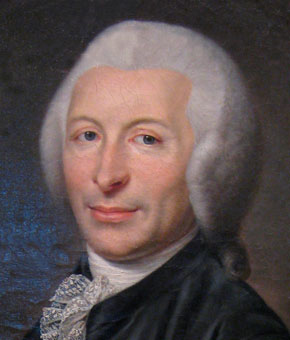 3/6/1791 The Assembly approved a text providing that "Every person condemned to the death penalty shall have his head severed".

5/4/1792 Guidon the carpenter that was used to build scaffolds, was asked for an estimated price for the machine suggested by Dr Louis. 5.660 livres including the scaffold.

10/4/1792 Roederer (Procureur général syndic) and Tobias Schmidt (a German harpsichord maker) reached a happy accord: 960 livres was to cover the cost of manufacturing the machine, the sum moreover providing for a leather bag in which to dispose of the severed head.

11/4/1792 It was on this Wednesday afternoon, the first real guillotine was set up, in the Cour du Commerce, rue Saint-André-des-Arts. Tobias Schmidt the maker of this prototype, had his workshop there, just opposite the printing office in number 8, where Marat had Ami du Peuple printed. The machine was tried out on sheep and calves. The blade was not the oblique one yet. It may have been curved like that of an axe, or even straight.

12/4/1792 Dr Antoine Louis who was involved in the first practical steps towards the creation of the guillotine, wrote to his colleague Dr Cullerier at Bicêtre combined hospital, prison and old peoples home." That the beheading machine will not be ready for a test on human cadavres until Tuesday.

17/4/1792 The first test on human corpses at a combined hospital, prison and old peoples home, at Bicêtre. At least 3 cadavers were beheaded. This was the day when it was decided to change the shape of the blade to oblique. Later that day a toolmaker in Paris got the job of making a new blade. It would be ready within three days.

20/4/1792 The newly conceived blade was fixed in position at Bicêtre.

21/4/1792 The improved machine was again tried out at Bicêtre. Three corpses were carefully selected from the military hospital in order to obtain, if possible, well-built men who had died in an accident or of some short illness which had not caused them to grow thin.

25/4/1792 Nicolas-Jacques Pelletier was executed on the place de Grève. Sanson operated the machine in dead earnest for the first time. It was not well received by the crowd who called for the return of the gallows.

5/6/1792 The architect Giraud submitted his report requested by Roederer. The report said: "Although well conceived in itself, it has not been perfected to the fullest possible extent. The grooves, the tongues and the gudgeons are of wood; the first should be made of brass, the others of iron; the hooks to which are attached the cords holding up the mouton are only fixed with round-headed nails; they should be fixed with strong nuts and bolts."

21/8/1792 The guillotine was installed at the place du Carroussel, where it stayed until May 7th 1793 with some interruptions, such as the execution of the king, which took place at Place de la Révolution.

23/09/1792 French Revolution Calendar is declared as official calendar of France Dates in parenthesis are dates in this particular calendar. 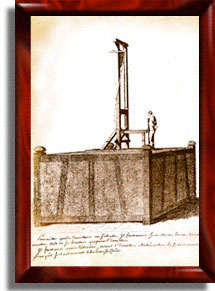 Illustration above shows the document which accompanied each of the machines supplied to the provinces in 1792.

9/6/1794 (20 Prairial year 2) The Guillotine is installed on the place de la Bastille, but only for a very short time. On June 11th. it was moved to the barrière du Trône (now Place de la Nation).

Louis Deibler succeeds Clément Sanson, who is dismissed. He is the first man to graduate from assistant executioner to executioner for all France.

Nicolas Roch is promoted to executioner at Amiens. He is the successor to Henri Ganier.

4/4/1854 M. Joseph Tussaud returns to London with a guillotine he had bought from Clément Sanson. The guillotine was to become a part of the Tussauds Waxworks. This guillotine was destroyed at a fire in 1925. Only the blade and mouton was saved.

Leon Berger, an assistant executioner and carpenter, improves and develops a new guillotine between 1870 and 1872. Among the improvements are the spring system, which stops the mouton at the bottom of the groves, and the lock/blocking device on the lunette. The new release mechanism for the blade, was also developed by Berger. All French guillotines built after 1872 are made according to Berger's design.

April 6th 1871 The Communards broke into a shed at 60 rue de la Folie-Regnault near the prison la Roquette. They took the guillotine to the Place Voltaire (now Pl. Léon Blum), and burned it there. 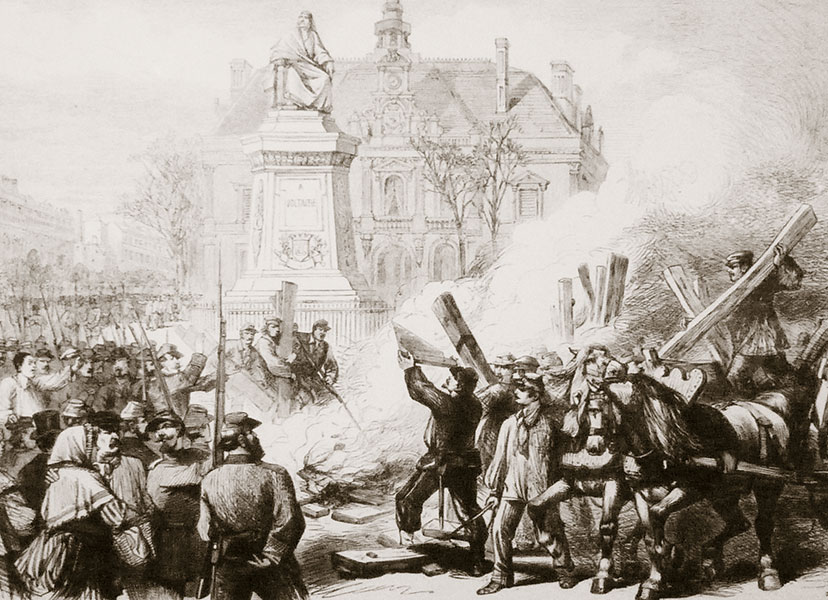 The guillotine was burned at the foot of the statue of Voltaire.

Nicolas Roch now occupies the post of executioner at Paris itself. His five assistants include MM. Berger, Ganier and Desfourneaux.

Roch installs a wooden shield at the top of the machine, to mask the knife from the sight of the approaching victim. A novelty suppressed by M. Deibler, when he replaces Roch in 1879.

June 28th Languille is executed at 5.30 a.m. Dr. Beaurieux conducts an experiment on the severed head. Read his report.

May 7th Prisoner Eugène Boyer receives clemency just as the assistants of Anatole Deibler leads him to the guillotine on Bvd. Arago outside the Santé prison.

February 2nd Anatole Deibler collapses with a fatal heart attack while waiting for his train at Métro Porte de St Cloud. He was setting off to execute Maurice Pilorge in Rennes.

The last public execution in France. On June 17th Weidmann is guillotined outside the Prison St. Pierre in Versailles.

24/6/1939 In accordance with a new law executions are no longer held in public, but have to take place (in Paris) in the yard of the Santé prison.

André Obrecht is chosen from more than four hundred applicants when the post as Bourreau falls vacant.

Marcel Chevalier succeeds André Obrecht, and remains on duty until the abolition of the death penalty in 1981.

The last official use of the guillotine in France. On the 10th of September Hamida Djandoubi is executed. (May it never be used again.)