The 1792 model.
This is as close as we can get to the original revolutionary guillotine from 1792.

The Guillotine has changed since it's first appearance in 1792. And the model shown here is very close to what the first guillotine looked like. The original machine is not preserved, but there are guillotines in museums in Belgium and the Netherlands, that looks pretty much like this one. The correct time for the guillotine in the Netherlands is between 1795 and 1800. The one in Belgium is younger, approx 1830.

The major improvements were made in 1870-72, when Leon Berger (an executioner's assistant) changed the design of the guillotine to its final form. The guillotine became more mobile and easier to mount and dismantle.

New features were added, but the principle and the effect remained the same.

In 1792 the guillotine was made of red painted wood. A simple device on the side was used to maintain the blade/mouton in position, and to release it. The rope followed the mouton down.

The wooden grooves were very soon lined with brass or iron, to prevent the wood from swelling, which could interfere with the movement of the mouton. And the rope was no longer following the mouton down, which gave the mouton more speed.

In 1870 the vertical posts were supported by metal braces, insted of the wooden ones used on earlier models.

The mouton was driving in the grooves on four wheels, two in each groove. On top it was held in place by an ingenious contraption, consisting of an arrow headed spike and a sprung-grab. The jaws of the sprung-grab were opened by means of a handle on the post.

When the mouton was in position the rope was pulled of the hook by means of a thin rope. To stop the falling mouton, a spring-system was placed in the lower end of the groove

The lunette had a copper facing towards the side of the blade, and a new lock/release mechanism was implemented. 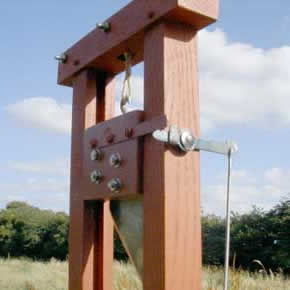 1792
A simple device on the side was used to maintain the blade/mouton in position. 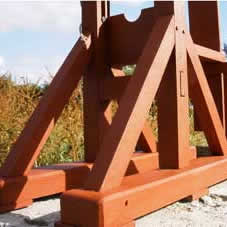 1792
The vertical posts were supported by wooden braces. 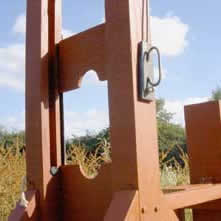 1792
The lunette was operated manually. 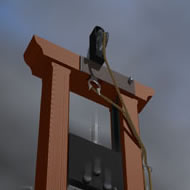 1870
The mouton was held in place by a contraption, consisting of an arrow headed spike and a sprung-grab. 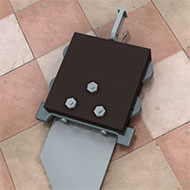 1870
The mouton was running on four wheels, two in each groove. 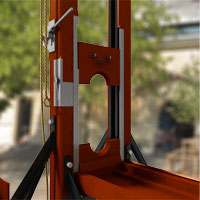 The official machines always had an oblique blade, but other shapes were used one guillotines homemade in the provinces, when the official guillotine was a long time comming in 1792.